Have you been doing lots of squats, lunges, and deadlifts (a.k.a. all of the movements you’ve heard are best for building glutes)... but still have a pancake booty?

If there is a single muscle group that most of the women we work with want to prioritize when they start coaching with our team, it’s glutes.

And typically we hear the same complaint…

“I’ve been doing ALL of the movements I’m supposed to be doing to build my butt… but I feel like my thighs just get bigger, while my glutes stay the same.”

The reality is, most of the movements you’ve heard are great for glutes… really aren’t great for your glutes.

Today’s blog takes you through the smarter glute training approach we take with our online clients, and the 5 keys you need to implement in your program to finally build the butt you want.

Your glutes are composed of the primary muscles:

UNDERSTANDING THE FUNCTION OF THE GLUTE MAX 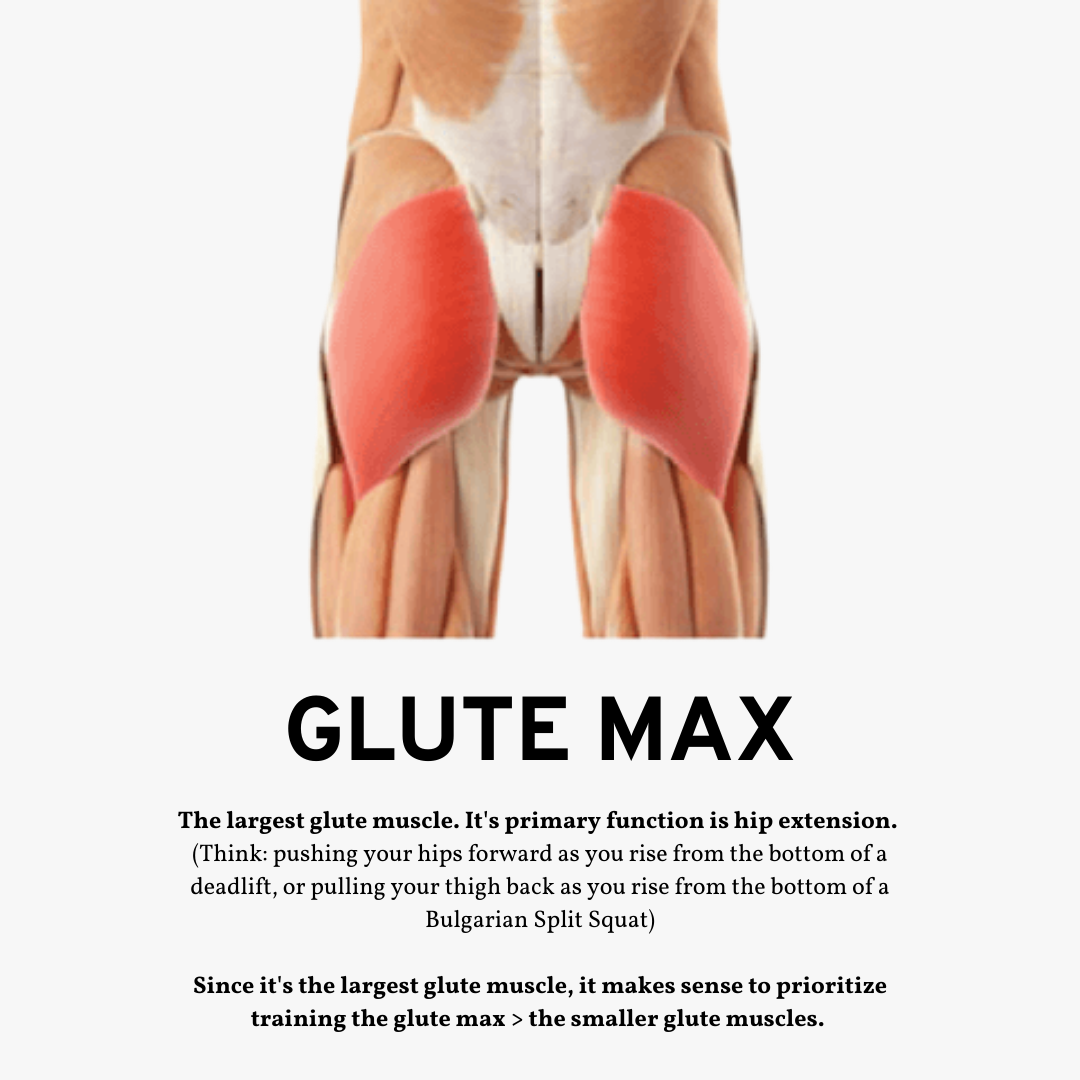 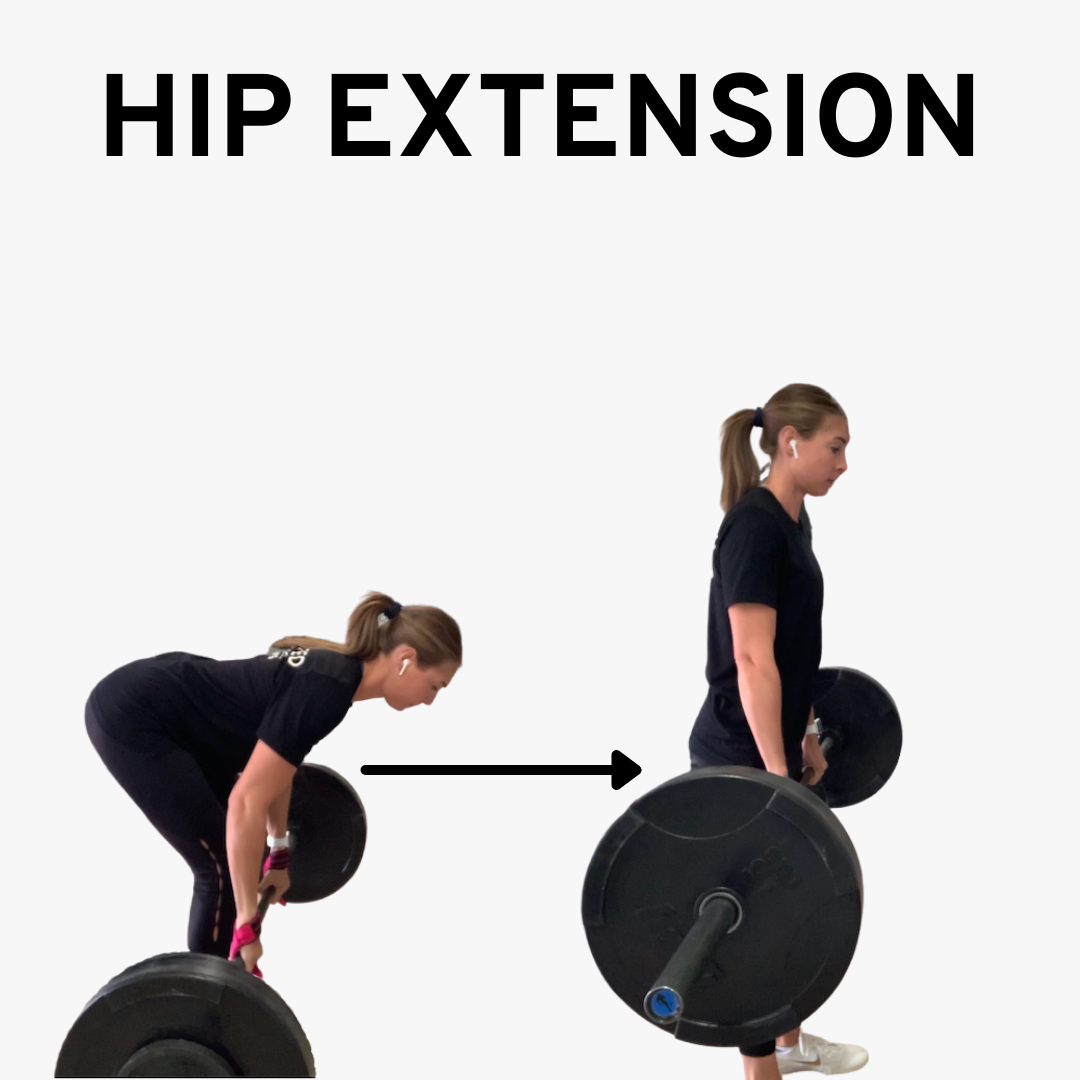 UNDERSTANDING THE FUNCTION OF THE GLUTE MED. 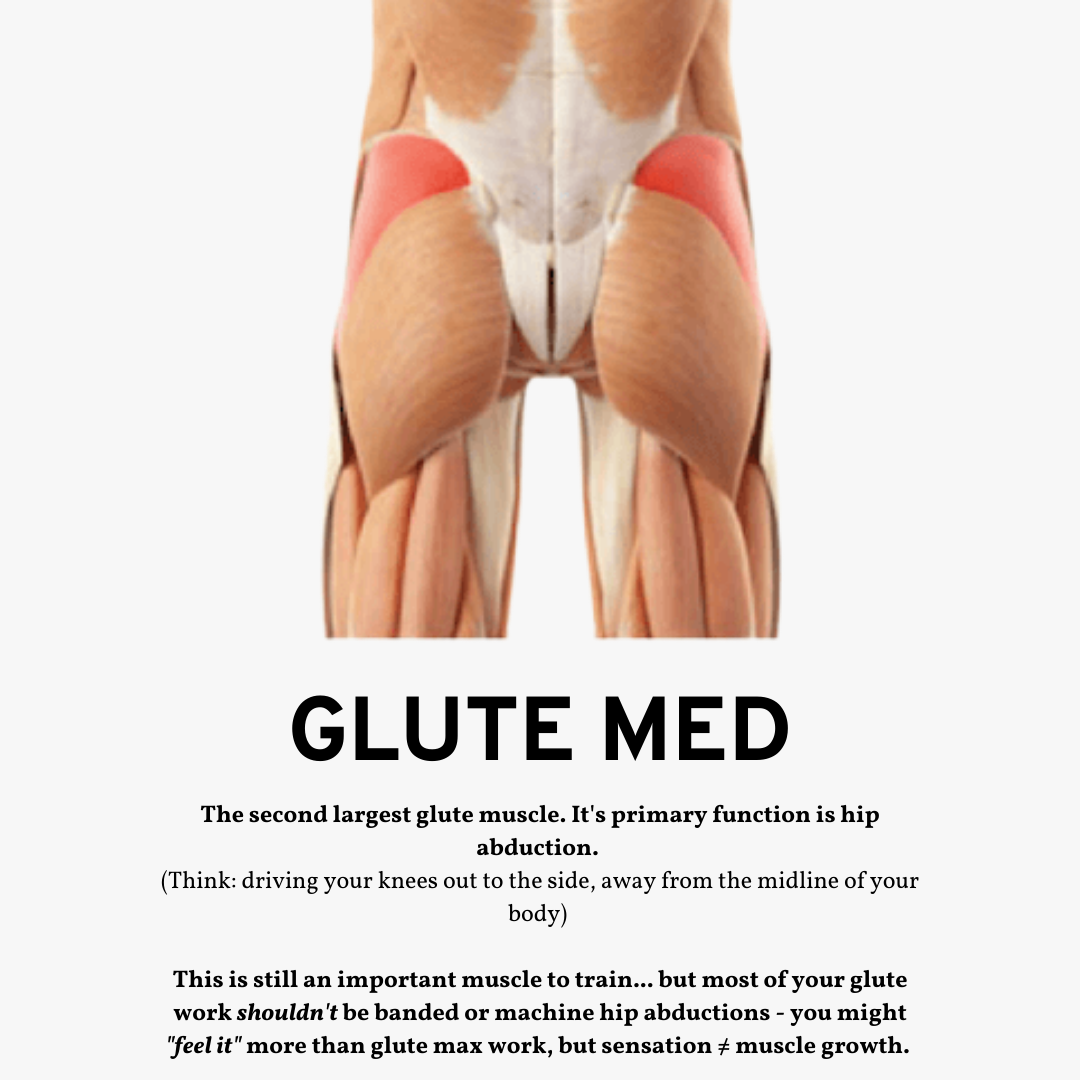 Your glute med is the second-largest muscle in your glutes. Often thought of as your “side-butt”, the glute med is primarily responsible for hip abduction (think: driving your knees out to the side, away from the midline of your body.)

UNDERSTANDING THE FUNCTION OF THE GLUTE MIN. 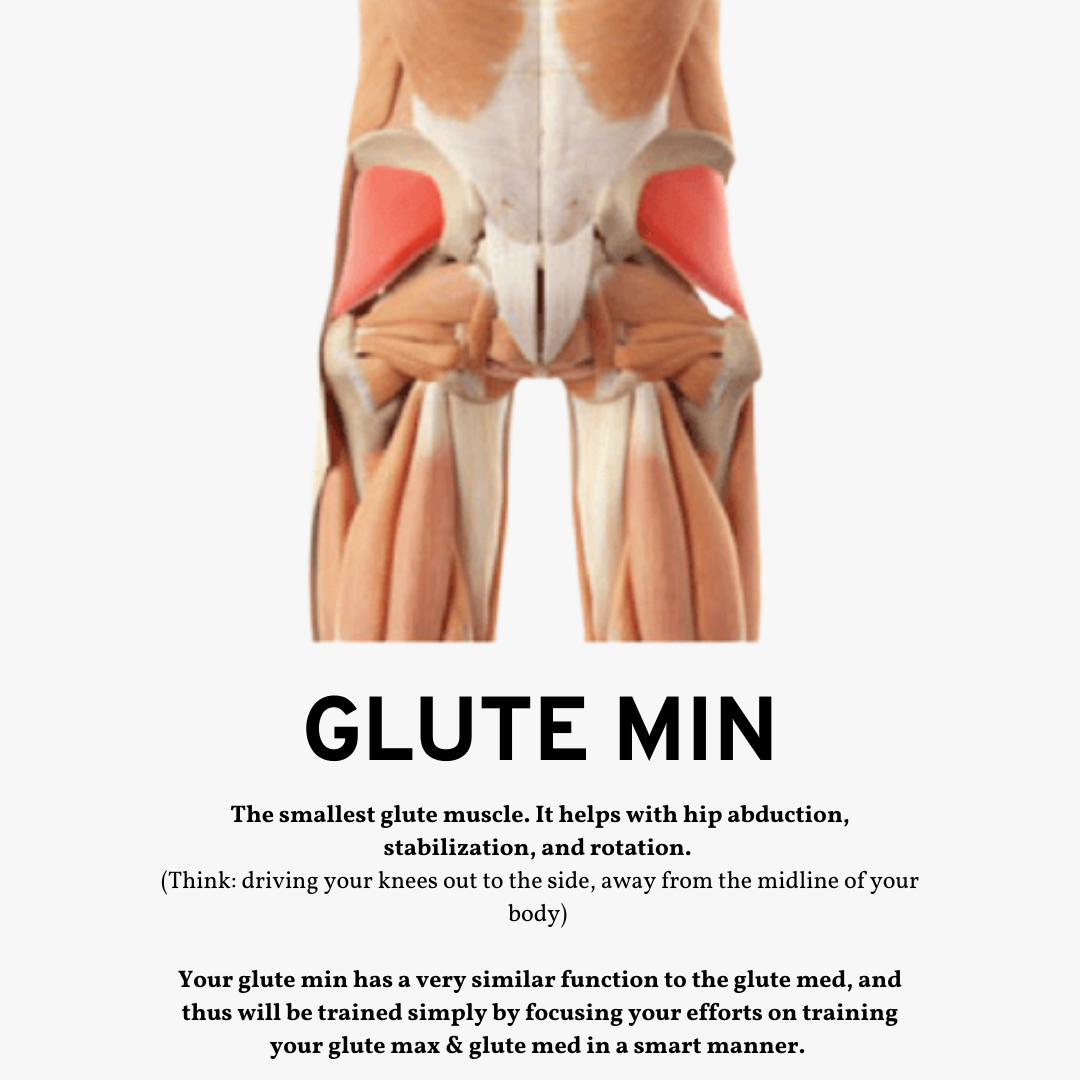 Your glute min is the smallest glute muscle, and has a very similar role to your glute med - it helps with abduction, and also aids in internal rotation of the thigh.

Now that you have a good understanding of glute anatomy, let’s dig into the keys to selecting the best exercises for building your glutes.

Since the glute max is the largest muscle group in your glutes, it makes sense that this should also be the group that gets the most attention, as training it properly will yield the largest visual changes.

This is because the muscles of the glute med are often easier to “feel” working - simply throw a booty band around your knees, shuffle side to side, and you’ll likely feel your glute med burning within the first 30 seconds.

The important thing to remember here…

Sensation does not = muscle growth.

Your muscles grow as a response to tension. While a high rep set of booty band side-shuffles might burn… your muscles are experiencing very little by way of actual tension (compare this to the huge amount of tension your glute max is under when doing a set of Romanain Deadlifts).

And while the glute med is still important to train, again it’s just a smaller muscle, and won’t need as much dedicated work as the glute max.

GLUTE BUILDING KEY #2: TRAIN YOUR GLUTE MAX WITH MOVEMENTS THAT CHALLENGE THE LENGTHENED AND SHORTENED POSITIONS

When it comes to building lean muscle, it’s important to understand where the movement is most challenging/the resistance that the muscle is met with is the greatest.

For every muscle group, there will be movements that are…

a.) Hardest in the shortened position. Basically, when the muscle is fully contracted (this is usually at the “top” of the movement - i.e. at the top of a hip thrust) the movement is most challenging.

b.) Hardest in the lengthened position. When the muscle is lengthened or “stretched”, the movement is most challenging (this is usually at the “bottom” of the movement - I.e. the bottom of a Romanian Deadlift). 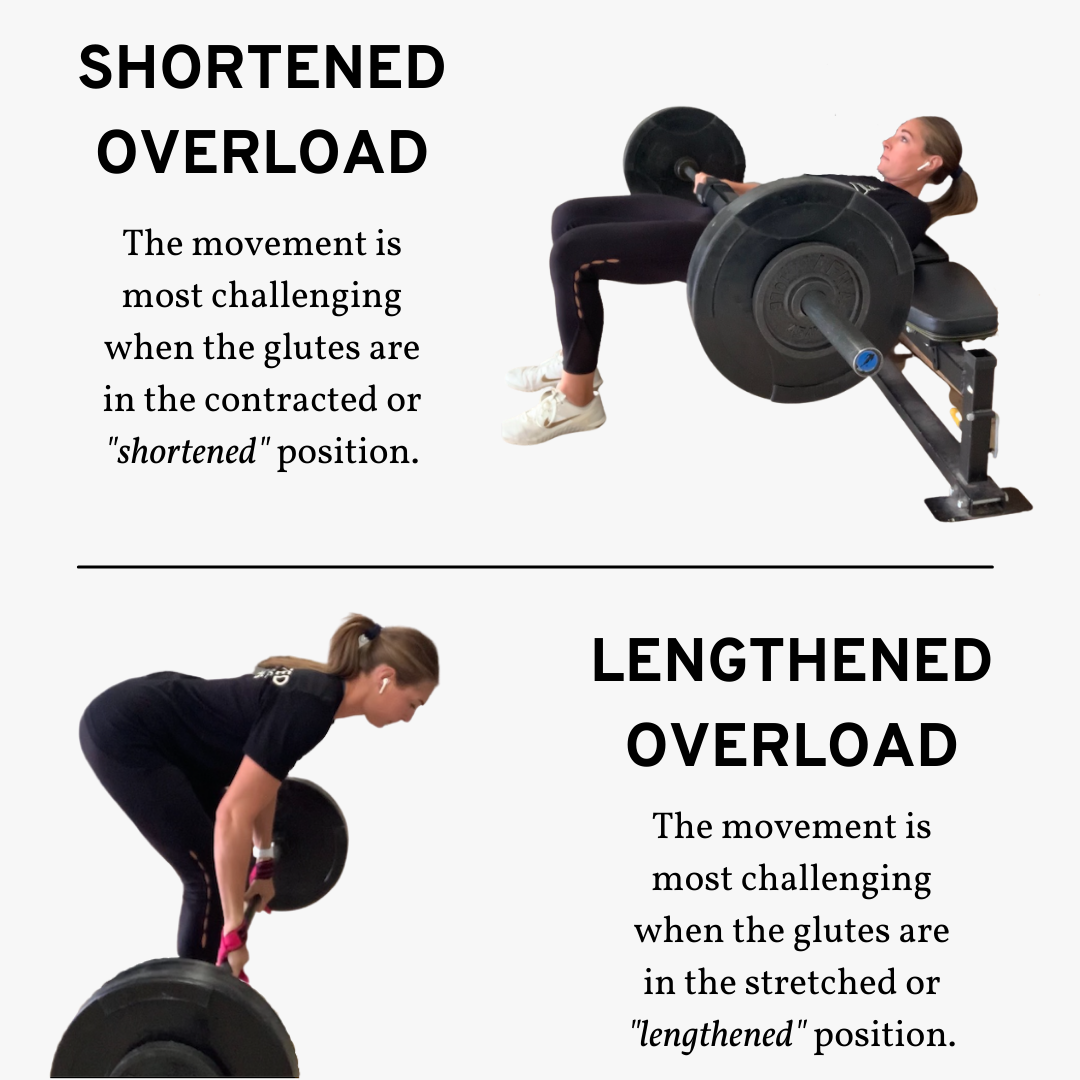 There will also be movements that are most challenging in the midrange (somewhere between shortened and lengthened), but these usually lean towards being more shortened biased or lengthened biased.

So when it comes to building great glutes, using movements that are challenging in the lengthened position is important - this will be more biased towards the lower portion of your glute max.

But, using movements that also overload the glute max in the shortened position is also important - these will bias more of the upper portion of the glute max.

Now, recent research has shown us that training muscles in the lengthened position does seem to be more conducive to muscle growth than the shortened: 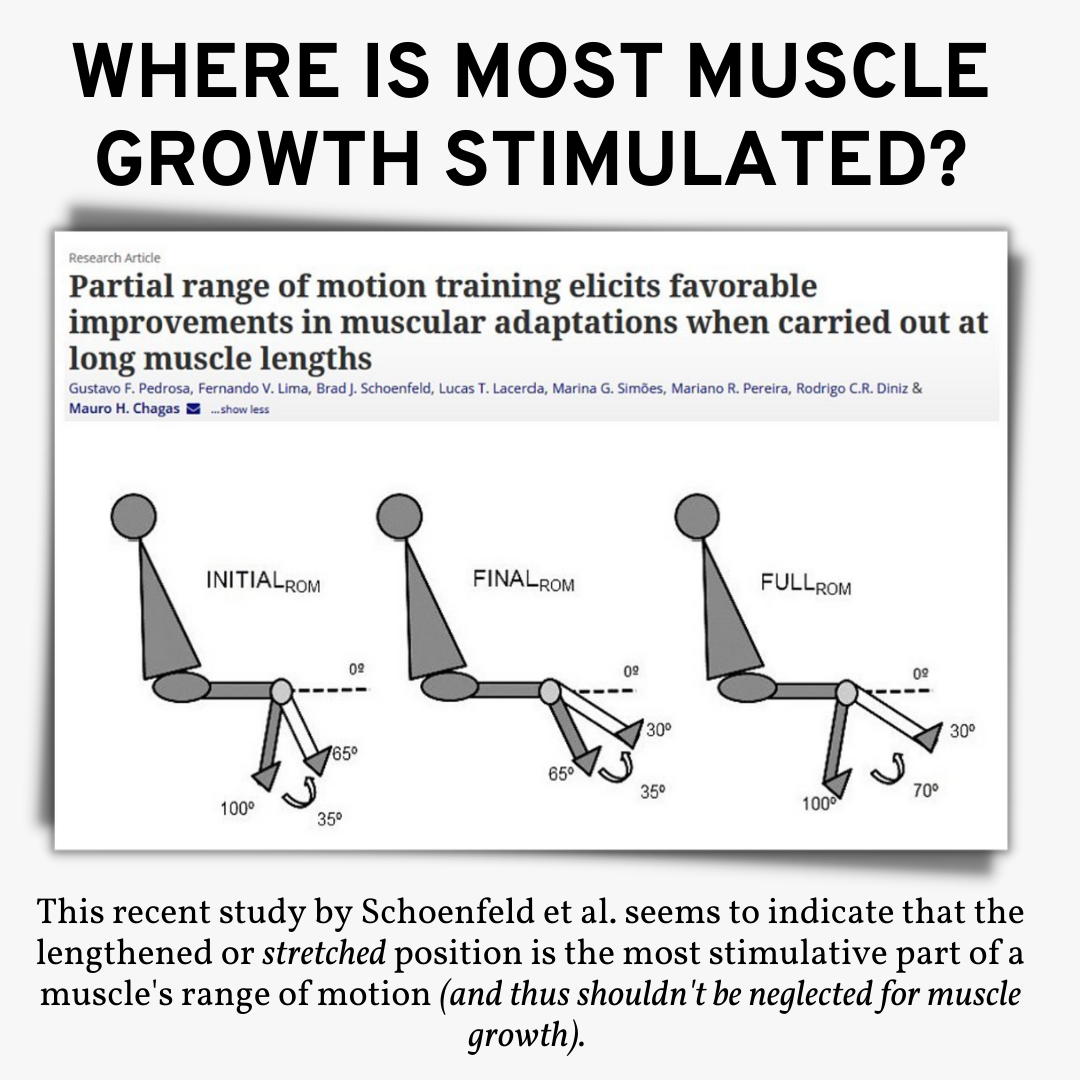 If your lower body goals are primarily building glutes, it would also be smart to include a lengthened and shortened focused movement every time you train glutes.

It’s also important to note that not everyone needs to or should train their lower body 3x/week like this (many of our clients train upper body and lower body 2x/week) - this is an example that would apply to a more advanced client.

One of the most problem complaints we hear from new clients trying to build their glutes?

“I do tons of squats and lunges, but they just make my thighs (quads) grow, not my glutes!”

The execution of a movement very largely determines what muscle groups will be targeted.

So it’s important to have a high-level understanding of what muscles act on what joints:

QUADS: Primarily act on your knee joint. So a movement that involves a lot of bending & extending at the knee will have to recruit a lot of quad.

GLUTES: Primarily act on the hip joint. So a movement that involves a lot of bending & extending at the hips will have to recruit a lot of glutes and hamstrings.

→ TO MAKE A MOVEMENT VERY QUAD BIASED: We need to focus primarily on knee flexion & extension. If we wanted to minimize glute recruitment, we would want to avoid too much bending & extending at the hips.

A great example of this is a Flat Foot Split Squat:

→ TO MAKE A MOVEMENT VERY GLUTE BIASED: We need to focus primarily on bending and extending at the hips. If we wanted to minimize quad involvement, we would want to avoid too much bending & extending at the knee.

A great example of this is the Bent Knee Romanian Deadlift:

→ TO MAKE A MOVEMENT EFFECTIVE FOR BOTH QUADS & GLUTES: We need a decent bit of bending & extending at both the knees and hips.

A great example of this is the Rear Foot Front Heel Elevated Split Squat:

So taking it back to the people that were struggling to build their glutes before starting coaching (despite doing lots of squats and lunges), the mistake they’re typically making is executing these movements in a manner that is focused more on knee bending & extending (especially easy to do with squats and lunges) and less on hip bending & extending.

Take the example of a Rear Foot Elevated Split Squat demonstrated by Coach Andrea below: 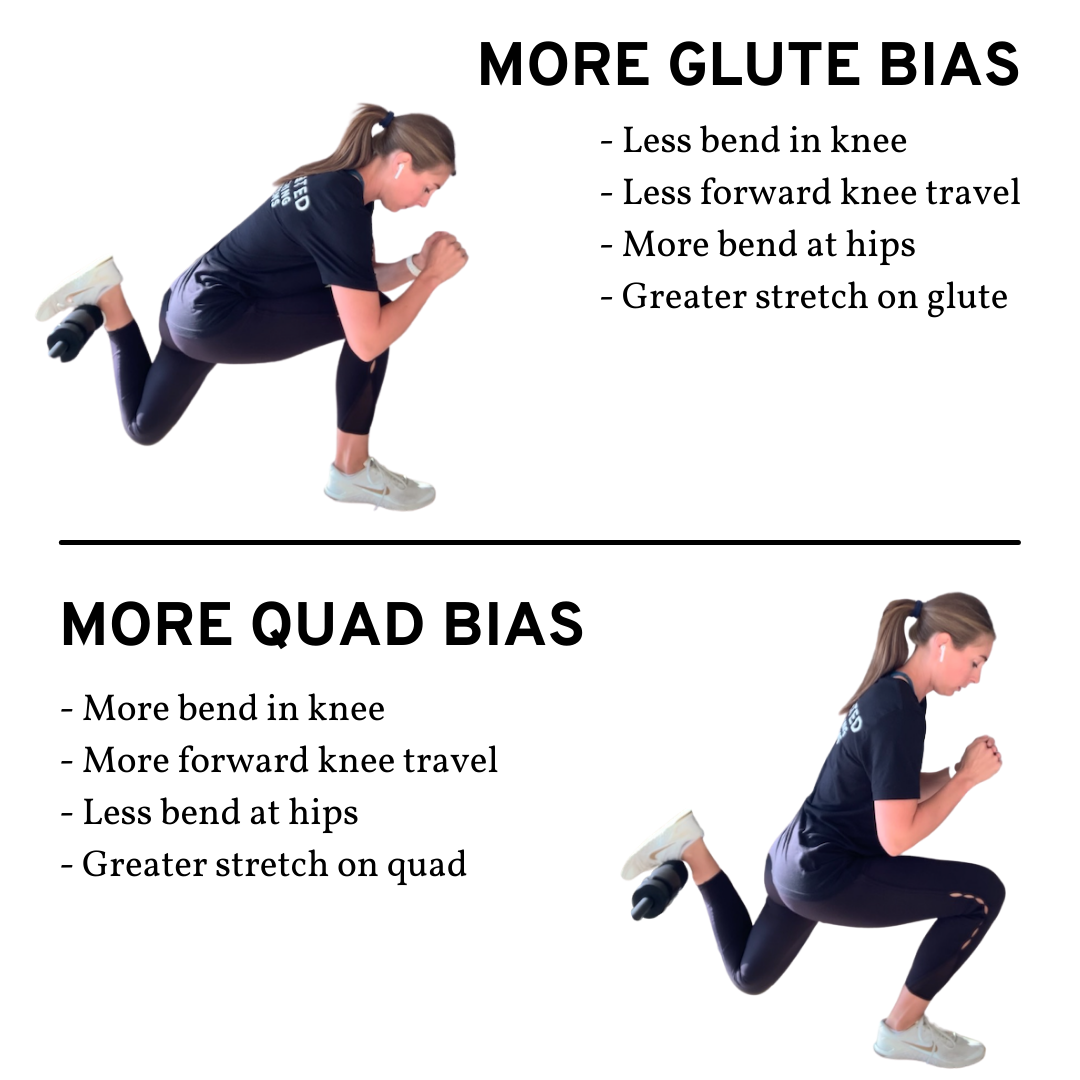 The way she executes this will make a big difference for the primary muscles recruited. To train the glutes we need a good amount of hip flexion within a movement.

Understanding this, you’ll also realize that a lot of movements you’ve heard are “great glute builders”, really aren’t for most people (i.e. traditional barbell back squats), and much better options are usually available.

Most people have been told…

“A wide stance is best for glutes.”

...and thus do things like sumo deadlifts and wide stance leg presses to build glutes.

The reality is, a wide stance actually is going to recruit much more of your Adductor Magnus (a large muscle on your inner thigh), whereas a narrower (for most people ~ hip width) stance will take your glute max through a great range of motion and allow for most of the tension experienced to be more biased towards the glutes, and less towards the adductors.

(Credit to N1 Education for discovering this concept.) 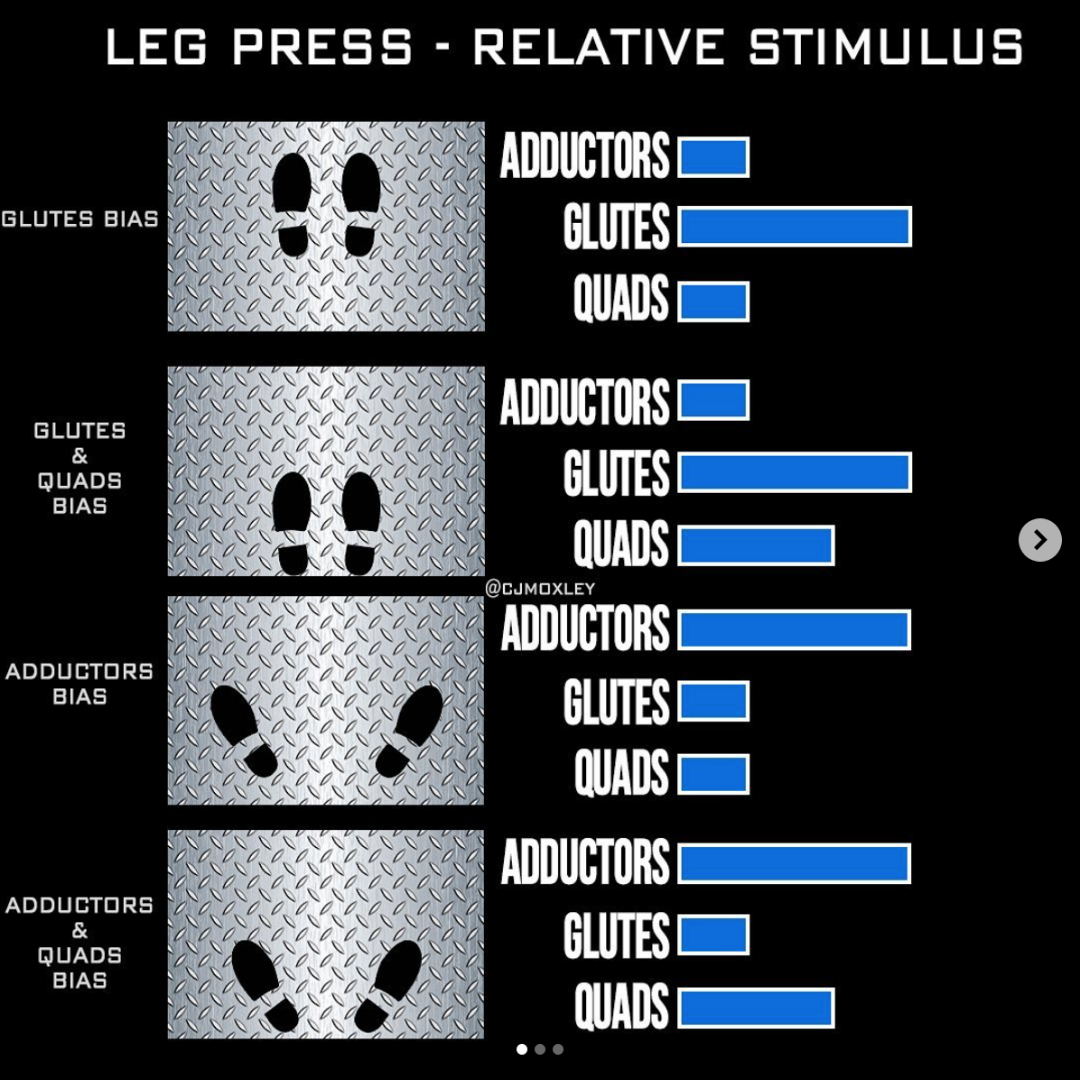 A great example of this is the Glute Dominant Leg Press: 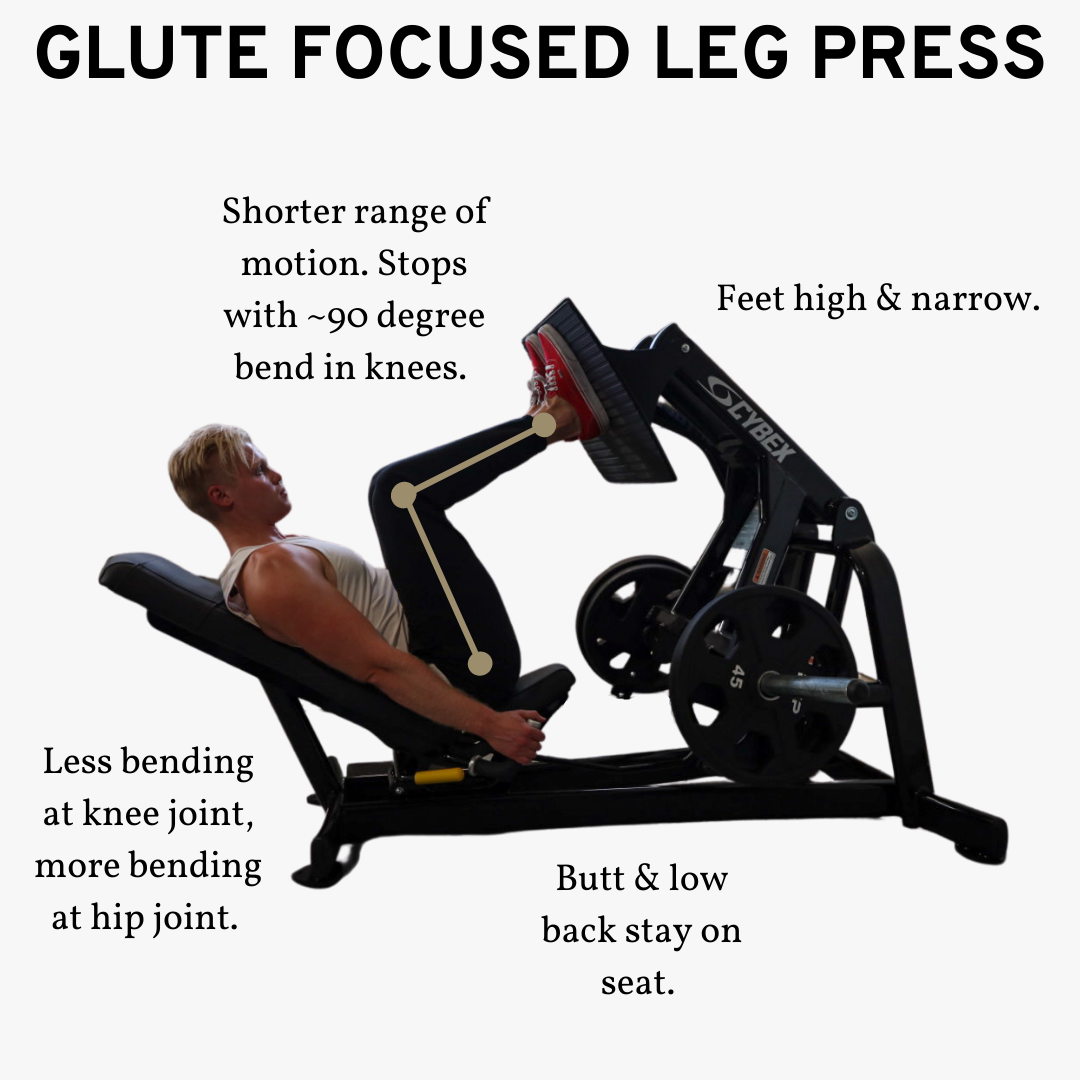 Typically, it’s been preached “feet high and wide” is best for glutes on leg press. In reality, fit narrower is going to be more effective.

This same concept should be applied to squat and deadlift variations along with leg presses - if the goal is to target the glute max, your stance should be narrow.

The important thing to remember is this…

Muscles grow as a response to tension.

It doesn’t matter how much you “feel the burn” in a movement… if the muscle doesn’t experience enough tension (typically, enough to take a movement to 3 reps shy of failure or less), it won’t grow.

You’ll see lots of people doing endless booty band workouts on Instagram, with tons of things like Band Donkey Kickbacks. And while these do burn… they don’t place the muscles of your glutes under any significant tension.

Basically, they’re a great way to waste a lot of time in the gym, without seeing any actual glute growth.

To build a great butt, most of your glute training should involve dumbbells, a barbell, or a leg press.

If you’ve been struggling to build the physique you’ve always wanted (despite the fact that you’re always pushing hard in the gym), click here now to apply for coaching with our team.

We’ll create a fully individualized training & nutrition protocol, tailored specifically to you and your goals, and be here to guide you with the support and accountability you need through every step of the transformation process. 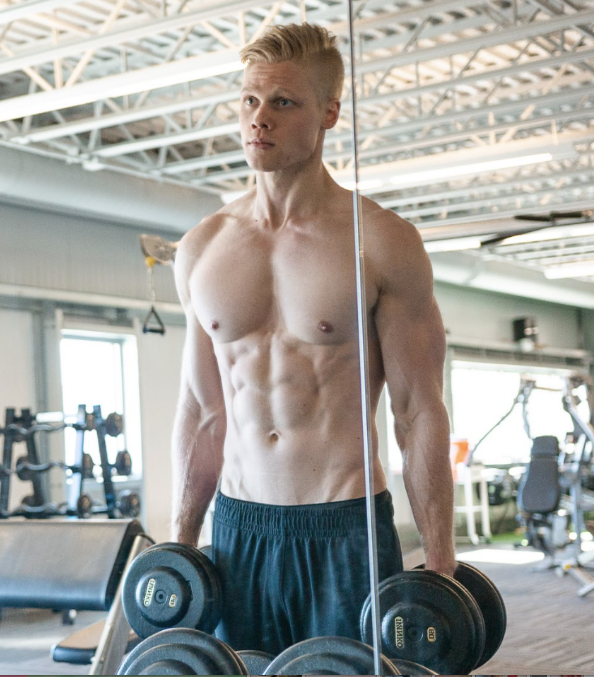 WRITTEN FOR YOU BY JEREMIAH BAIR

I love simplifying the mysterious art and science of training and looking like it. I’ve been on my own journey, and I share what I’ve learned so you can get there faster, on my Podcast and on Instagram.

APPLY TO WORK WITH our team →