When it comes to gender differences in training, you hear two things:

#1: If women train like men do, they'll get overly-muscled & bulky!

Today's blog gives you clarity on how to train properly for YOU, in order to build a lean, strong body.

So although women & men have a very similar ability to increase strength and muscle mass relative to their starting point, men start the process with much more upper body musculature than women, and thus often have a much higher "ceiling" to how muscular their upper bodies can get.

This mean idea that women will grow "bulky/manly" upper bodies by strength training is very inaccurate. Man or woman, an extremely muscular body takes YEARS of focused effort on... well, getting a jacked upper body. It doesn't happen unintentionally, it doesn't happen overnight, and it's likely much harder to achieve for women.

Women usually have a lot more of the hormone estrogen than men. (Check out THIS BLOG for a deeper understanding of hormones and how they impact your results.)

Estrogen helps muscular repair & recovery - meaning that most women can handle both more volume (number of hard sets) in a training session AND can train muscle groups more frequently.

Men usually have a lot more of the hormone testosterone, which means that men usually start out with more muscle.

Women tend to have more Type 1 "slow twitch" fibers, and greater capillary density. Type 1 fibers are better at breaking down both carbs and fat. Greater capillary density means an improved ability to get blood to a muscle & clear metabolites (think: stuff that builds up in your muscles when you feel "the burn".)

Women also have larger stores of intramuscular fat. This, paired with the Type 1 fiber's ability to break down fat means that women are often burning more fat and LESS glycogen training than men. In turn, perceived effort of an exercise (tied in closely to how much glycogen you have available) is lower for women, and it takes longer to stall out.

Women are better at doing higher reps than men, and can do more reps at a given percentage of their 1 rep max than men.

Women tend to have wider hips than men, and the a greater "Q angle" - a measurement of the angle between the quad muscles and the patella tendon. 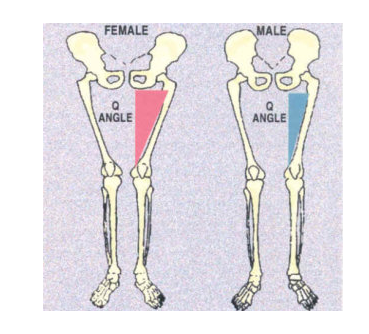 Basically, an increased Q angle results in a tendency for the knees to cave in during hip flexion (think: bending at the hips). This results in many women being more "quad dominant".

I've had many women start online coaching with me that are scared to train lower body movements because: "Whenever I train lower body, only my thighs (quads) grow... not my glutes or hamstrings!"

This can likely (partially) be blamed on the Q angle.

Fortunately, I've found 100% of the time, it's fixable with proper exercise selection & intention. (The beauty of having a training program completely individualized to you, like my online clients get.)

Women are generally much more flexible than men. (And anecdotally, more often hyper-mobile as well.)

Like everything in coaching, of course this is all very individual - which is exactly why I have all my online clients record a movement assessment before prescribing any mobility or movement - but generally women will need very little mobility work, and benefit from more stability & activation work in their pre-workout priming.

Men, on the other hand generally benefit from a bit more mobility work.

This is generally where the biggest difference lies in how I program for online clients... while it's really not THAT different, it's also dumb to say that everyone should train EXACTLY the same.

General, women and men have different muscles they want to build (and avoid building), and we must take this into consideration when building client programs.

So if we're looking at how we'd apply these differences to the perfect training day... 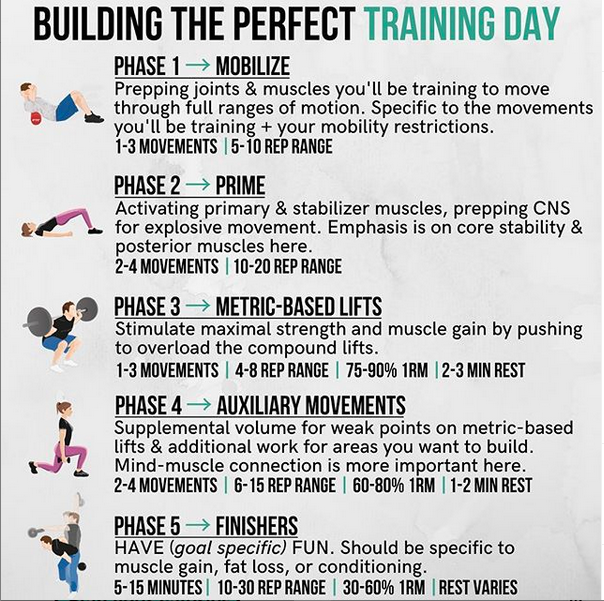 And less focus on:

In you auxiliary movements and finishers, we'd focus on exercises that focused on your desired muscle groups (e.g. reverse lunges instead of forward lunges, lateral raises instead of cable crossovers & curls, glute finishers instead of shrugs).

→ Women are better at doing higher reps than men, and can do more reps at a given percentage of their 1 rep max than men.

→ Due to better ability to recover & lower fatigue, women can likely benefit from more volume (hard sets), both in a training session, and across training weeks/months/years.

All that said, the fundamentals of smart programming are universal to men & women alike: 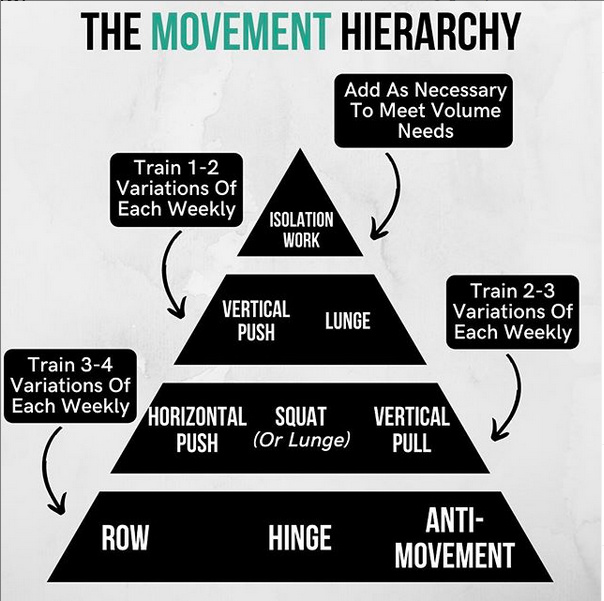 1. Focus on the movement hierarchy

2. Exercise selection should be goal specific

CLICK HERE NOW to apply for online coaching with me. 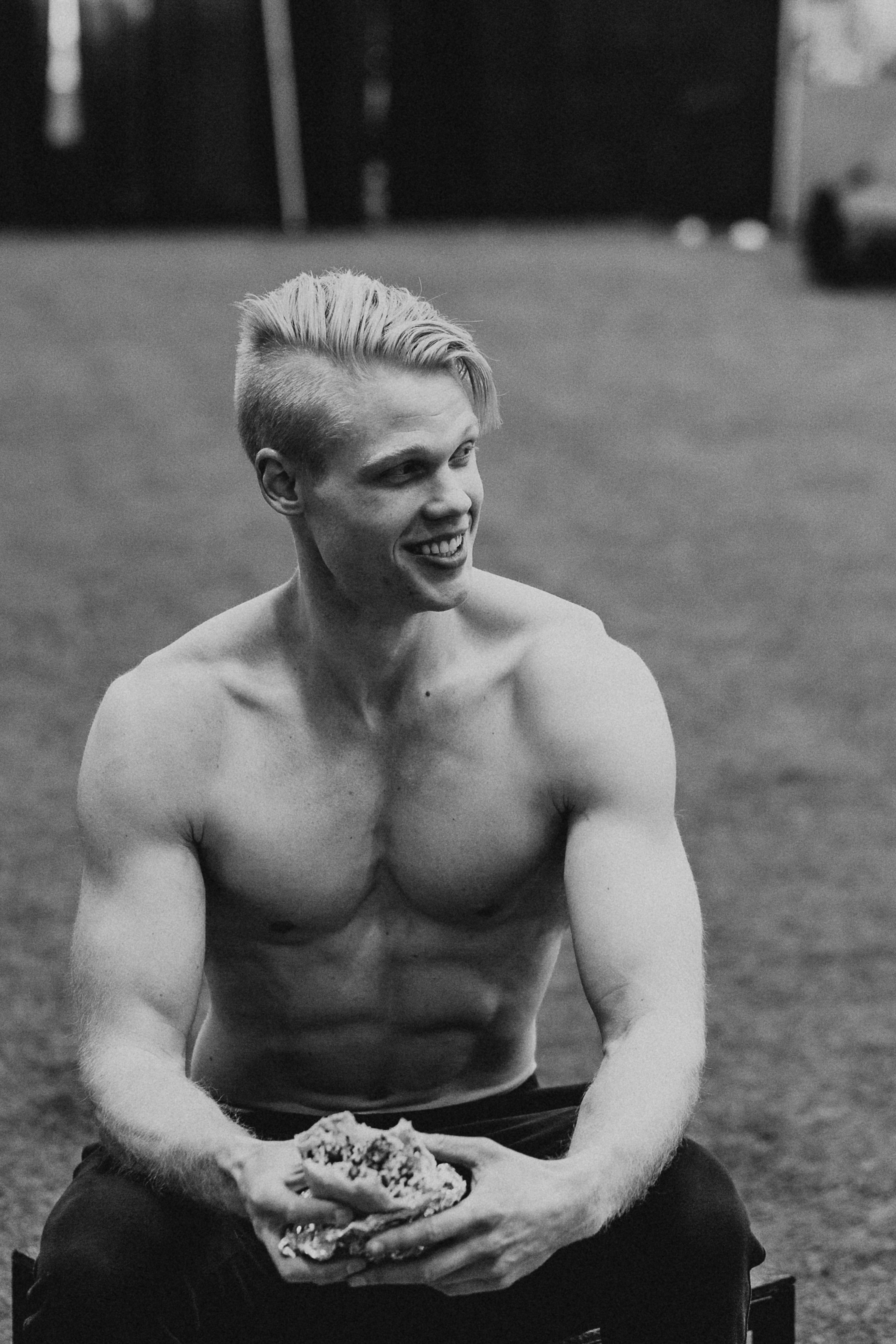 Jeremiah Bair is a certified nutrition coach, strength coach, and owner of the online coaching business Bairfit. Check out his Instagram and Podcast for more applicable strategies for building your leanest, strongest, and most confident self.